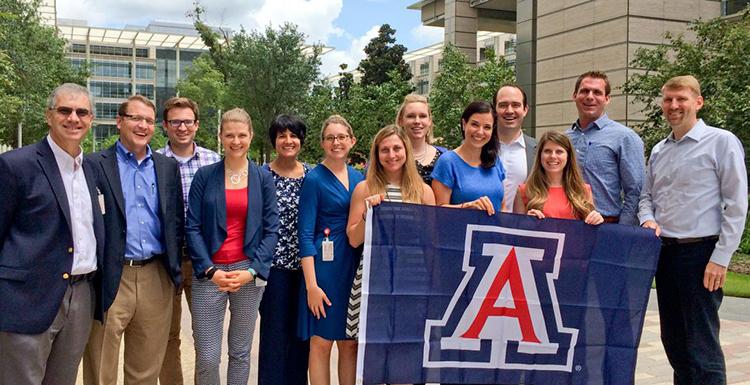 Like MGE alumnus John H. Kane, College of Engineering alumnus Eric Carmichael, second from left, contributed to the over $9.3 million in donations received by UA in the 2018 financial year.

Thanks to the generosity of more than a thousand individual donors, such as MGE alumnus John H. Kane, the College of Engineering’s development team raised more than $9.3 million in fiscal year 2018.

Kane graduated from the UA with a degree in mining engineering in 1960. Though he died in July 2017, he included a planned gift to the college in his estate plan for after his death totaling at more than $1.3 million. The money will fund an endowed scholarship to support the cost of attendance for students and a general endowment for MGE.

Kane spent part of his career working for Asarco Inc., a mining company based in Tucson. He never strayed far from his metallurgical roots, accumulating a vast collection of minerals over the course of his life. Though he made small donations to the university over the years, this planned gift is the largest by far.

Chris Fraker, the senior director of gift planning at the UA Foundation, advises potential donors, particularly those interested in making planned gifts, to work closely with the Foundation through the gift-giving process. Making sure the language in official paperwork is clear and specific ensures that donors’ money will fund exactly what they want.

"If you have charity in your heart, and want to set your legacy here, a planned gift is a good way to start thinking about it," he said. "These are simple but powerful gifts. When someone includes the university in their estate plan, that’s them including us in their family. We take the importance of that very seriously."