From Byproduct to Buildings: Finding New Use for Fly Ash 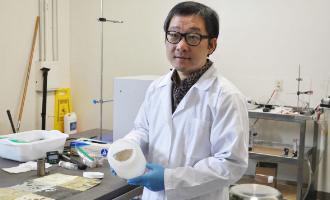 A byproduct of coal-burning plants, fly ash -- and more specifically, its extremely fine and easily inhaled particles -- have been an environmental and medical concern for years. In some studies done in China, it was even linked to medical problems such as infertility.

Though regulated in the U.S., fly ash is still produced, but thanks to Zhang, it now has a new, environmentally friendly purpose as building material.

Zhang has launched a startup, Acrete, to produce the material -- a concrete alternative that is three times the compressive strength of cement and twice the flexural strength. The company has since partnered with Tech Launch Arizona to patent the product and ultimately bring it to market.

Not only is using fly ash in the material a more sustainable use for the byproduct, it requires less energy to produce than traditional Portland cement.

"The initial idea was not to replace concrete, it was to reduce industrial waste by creating a construction material," Zhang said in a recent interview. "In the process of experimenting, we found that we could actually make a very strong material."

Zhang and Acrete have applied for a patent for the concrete alternative, and are already researching the use of other industrial byproducts, such as mine tailings, in other applications.